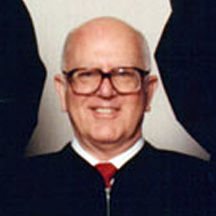 Judge Frank Q. Nebeker was nominated by President George H.W. Bush and appointed to the United States Court of Veterans Appeals in October 1989.

Judge Frank Nebeker has devoted his entire adult life to government service. A native of Utah, he holds an associate degree in history from Weber College, a bachelor's degree in political science from the University of Utah, and a law degree from American University.

During his law school years, Judge Nebeker worked as a correspondence secretary in the White House. He began his legal career in 1956 as a trial attorney in the Internal Security Division of the Department of Justice. Two years later, he became an Assistant United States Attorney for the District of Columbia, serving from 1962 to 1969 as the Chief of the Appellate Division. His reputation as an appellate counsel led to his appointment in 1969 as an Associate Judge on the District of Columbia Court of Appeals, where he served until his retirement in 1987.

Judge Nebeker's retirement was short. He responded to yet another call to public service as Director of the Office of Government Ethics, responsible for developing and monitoring the rules which govern the conduct of those in the Executive Branch. When Congress provided for judicial review of veterans benefits decisions and created the new seven-judge U.S. Court of Veterans Appeals (now the U.S. Court of Appeals for Veterans Claims), the President appointed Judge Nebeker, with the consent of the Senate, to be its first Chief Judge. The Court began operating on October 16, 1989.

Judge Nebeker has been active for many years in the organization and presentation of education programs for attorneys and appellate judges throughout the country.