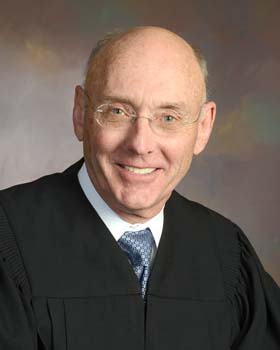 Judge Lawrence B. Hagel was appointed a Judge of the U.S. Court of Appeals for Veterans Claims by President George W. Bush in December 2003. He became Chief Judge on August 7, 2015. Judge Hagel assumed Senior status as a Retired Recall eligible judge on October 8, 2016.

Judge Hagel's military experience includes graduation from the U.S. Naval Academy and service in the U.S. Marine Corps as an infantry platoon commander, a headquarters company commander, and a field advisor to an infantry battalion of the Army of the Republic of Viet Nam during an extended tour in Viet Nam. He then attended law school at the University of the Pacific's McGeorge School of Law and after graduation remained in the Marine Corps serving as a Judge Advocate. He later received a masters of law (labor law) with highest honors from the National Law Center of The George Washington University. During his time as a Judge Advocate he represented individuals charged with crimes under the Uniform Code of Military Justice and before administrative and medical boards. He was also appointed Special Assistant U.S. Attorney. Judge Hagel appeared on behalf of the Department of the Navy in U.S. district courts throughout the country, the U.S. Court of Appeals for the Fourth Circuit and Ninth Circuit, the Federal Labor Relations Authority, the Federal Mediation and Conciliation Service, and in labor arbitration. Judge Hagel was awarded the Combat Action Ribbon, the Meritorious Service Medal (three awards), the Joint Service Commendation Medal, and the Army Commendation Medal.

Among other professional activities, Judge Hagel has served as a member of the Administrative Conference of the United States (1995); Steering Committee, District of Columbia Bar Administrative Law and Agency Practice Section (1999-2003); U.S. Court of Appeals for Veterans Claims Rules Advisory Committee (1992-2003); and Federal Bar Association, Veterans Law Committee Section, of which he was the Chair, 1994-1995. He is currently an emeritus member of the George Mason Inn of Court.