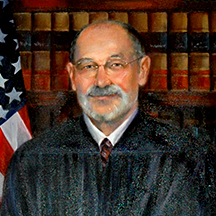 Judge Donald L. Ivers was nominated by President George H. W. Bush and appointed to the United States Court of Appeals for Veterans Claims on August 6, 1990.

Judge Ivers was one of seven judges serving on the new Federal Court established pursuant to Article I of the Constitution of the United States with responsibility for judicial review of legal issues arising from grant or denial of benefits by the U.S. Department of Veterans Affairs, including questions of constitutional law, statutory and regulatory interpretation and adequacy of administrative review.

From 1985 to 1990, Judge Ivers served as General Counsel of the Veterans Administration and, as Acting General Counsel of the Department of Veterans Affairs upon its creation in March of 1990. He directed a nationwide legal staff of some 650, including 320 attorneys. His office was responsible for providing legal advice and services to the Administrator and Secretary, and to the nationwide VA staff of some 240,000.

From 1984 to 1985, Judge Ivers was Counselor to the Secretary of Transportation and Chairman of the Secretary's Safety Review Task Force. During that same period and from 1981 to 1984 he served as Chief Counsel of the Federal Highway Administration.

Prior to his appointment with the Department of Transportation in May 1981, Judge Ivers served as Chief Counsel for the Republican National Committee and was active in the 1980 Presidential Campaign and in the Reagan Administration transition, in charge of the transition team for the Federal Maritime Commission.

Judge Ivers served on active duty in the United States Army from 1963 to 1968, with assignments in the United States, Germany, and Vietnam. He retired from the U.S. Army Reserve with the rank of Lieutenant Colonel. His decorations include the Bronze Star, Air Medal, Meritorious Service Medal, Army Commendation Medal and the Joint Services Achievement Medal.

Judge Donald L. Ivers served briefly as Chief Judge before retiring from active service in August 2005. He then served as a recall-eligible retired Senior Judge for twelve years before fully retiring in 2017. He is married and has three children.