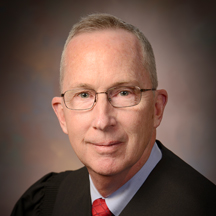 Judge Joseph L. Falvey, Jr., was nominated by President Donald J. Trump, confirmed by the Senate, and appointed a Judge of the United States Court of Appeals for Veterans Claims in May 2018.

Previously, Judge Falvey served as an Assistant United States Attorney, in the United States Attorney's Office for the Eastern District of Michigan. As a member of the National Security Unit, he was responsible for investigating and prosecuting matters involving national security including matters involving individuals and organizations that engage in foreign counter-intelligence, espionage, and those who plan, financially support, or carry out international and domestic terrorist activities. Before joining the United States Attorney's Office, Judge Falvey was a Professor of Law at Ave Maria School of Law from 1999 to 2007 and the University of Detroit School of Law from 1994 to 1998, where he taught evidence, trial advocacy, military law, national security law, and criminal law and procedure.

Judge Falvey is also a retired Marine Corps officer who began his military career as an Armor Officer in 1981 and served as a Tank Platoon Commander, Battalion Adjutant, and Anti-Tank (TOW) Company Executive Officer. From 1984 to 1987, he attended law school through the Marine Corps's Funded Legal Education Program. Certified as a Judge Advocate in 1987, Judge Falvey was initially assigned to Camp Pendleton, California, where he served as a prosecutor or defense counsel in more than 250 courts-martial. He also served as the Senior Judge Advocate for the 11th Marine Expeditionary Unit (Special Operations Capable). In 1990, Judge Falvey attended The Judge Advocate General's School of the Army, and he was subsequently assigned as the Deputy Head, Military Law Branch, Judge Advocate Division, Headquarters Marine Corps.

In 1994, Judge Falvey left active duty and continued to serve in the U. S. Marine Corps Reserve. From 1994 to 1998, Judge Falvey was a Special Courts-Martial Judge and presided over more than 100 courts-martial. In 1998, he was assigned as an Assistant Staff Judge Advocate for Operational Law at U.S. Central Command, and he was mobilized in support of Operation Enduring Freedom in the aftermath of the 9/11 terrorist attacks. In this capacity, he worked closely with various agencies of the U.S. Government on matters related to the Global War on Terrorism and he deployed to Afghanistan in 2002. Judge Falvey subsequently served as an Appellate Judge for the U.S. Navy-Marine Corps Court of Criminal Appeals. From 2008 to 2010, Judge Falvey served as the Commanding Officer, Marine Forces Reserve, Legal Services Support Section. Judge Falvey retired in 2011 having attained the rank of Colonel.

Judge Falvey and his wife, Anne, have nine children and they are licensed foster parents who have opened their home to more than a dozen abused and neglected children.