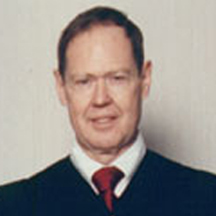 Judge Holdaway was born in Afton, Wyoming. After graduating from Star Valley High School in Afton, he received his Bachelor of Arts degree in history in 1957 and his law degree from the University of Wyoming in 1959. Upon completion of the Reserve Officers Training Corps curriculum and the course of study at the University of Wyoming, he was commissioned a second lieutenant in the infantry, later transferring to the Judge Advocate General's Corps. His military education includes the Infantry Officer Basic Course, the Basic and Advanced Courses at the Judge Advocate General's School, the United States Army Command and General Staff College, and the Industrial College of the Armed Forces, National Defense University.

Prior to his appointment to the bench and retirement from the Army, Judge Holdaway held a wide variety of important positions including Chief Judge, United States Army Court of Military Review, and Commander, United States Army Legal Services Agency, Washington, DC.

Judge Ronald M. Holdaway retired from the U.S. Court of Appeals for Veterans Claims in November 2002 and is now a senior judge serving in recall-eligible status. He is married and has two children and six grandchildren.