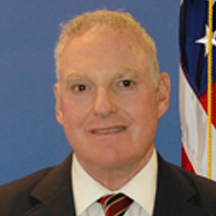 Judge Kenneth B. Kramer was nominated by President George H.W. Bush and appointed as a Judge on the United States Court of Appeals for Veterans Claims, Washington, D.C., in 1989.

Judge Kramer graduated with a Bachelor of Arts degree from the University of Illinois, Champaign, Illinois (1963), Phi Beta Kappa, Honors and High Distinction, and Distinguished ROTC Military Graduate, and with a Juris Doctor degree from Harvard Law School, Cambridge, Massachusetts (1966).

Judge Kramer is a former Commissioner, National Commission on Uniform State Laws; former member of the Board of Visitors, United States Air Force Academy; and a founder and former Chair of the United States Space Foundation. He served from 1990 to 1994 as Chair of the Committee on Veterans' Benefits, Administrative Law Section, American Bar Association. Judge Kramer is currently serving as a director of the United States Association of Former Members of Congress, and as co-chair of the Association's annual charitable golf tournament held for the benefit of wounded warriors.

Judge Kramer served as Chief Judge from October 6, 2000 until his retirement on September 14, 2004. He is now a senior judge serving in recall eligible status. He is married and has two children.