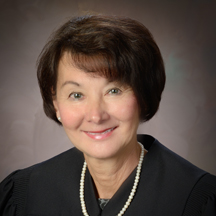 Judge Coral Wong Pietsch was nominated by President Barack Obama and subsequently appointed a Judge of the U.S. Court of Appeals for Veterans Claims in June 2012.

Judge Pietsch has a distinguished career in public service, both in the military and as a civilian. She was commissioned in the U.S. Army Judge Advocate General's Corps and served six years on active duty. Judge Pietsch continued her service in the U.S. Army Reserve and rose to the rank of Brigadier General. She became the first woman to be promoted in the rank of Brigadier General in the US Army Judge Advocate General's Corps and the first woman of Asian ancestry to be promoted to Brigadier General in the Army. In her military career, Judge Pietsch participated in numerous exercises and deployments throughout the Asia Pacific Region.

Until her appointment to the bench, Judge Pietsch held the position of Senior Attorney and Special Assistant at Headquarters, U.S. Army Pacific located in Honolulu, Hawaii. In this position, she provided and managed legal services in support of the U.S. Army Pacific's mission to train Army Forces for military operations and peacetime engagements aimed at promoting regional stability. Her responsibilities included providing advice and counsel in a myriad of areas of law, to include environmental law, fiscal law, personnel law, international law, and administrative law.

As part of the 2007 "surge" in Iraq, Judge Pietsch volunteered as a Department of Defense civilian to deploy to Iraq for a year where she was seconded to the U.S. Department of State to serve as the Deputy Rule of Law Coordinator for the Baghdad Provincial Reconstruction Team. During her deployment to Iraq, Judge Pietsch assisted with numerous civil society projects involving a variety of Rule of Law partners, including the Iraqi Jurist Union, Iraqi Bar Association, law schools, and international rights, women's rights and human rights organizations. She evaluated and sought funding for numerous projects aimed at building capacity within the Iraqi legal community to include the establishment, in close collaboration with the Iraqi Bar Association, of a Legal Aid Clinic at one of the Iraq's largest detention facilities. During her time in Iraq, she also established meaningful relationships with numerous Government of Iraq ministries, nongovernmental organizations, and Coalition partners to help reinvigorate the rule of law in Iraq.

In 2006 Judge Pietsch was appointed by the Governor of Hawaii to the Hawaii Civil Rights Commission where she served for seven years. Shortly after the appointment, the Governor selected Judge Pietsch as its Chair and, during her tenure, the Commission improved the claims administrative process, eliminated backlogs, implemented a public education program, and initiated an awareness program within the public schools.

Judge Pietsch's academic degrees include a bachelor of arts, master of arts, and a juris doctor degree. She was also a Senior Executive Fellow at the Harvard University Kennedy School of Government, is a graduate of the Defense Leadership and Management Program, and a graduate of the Army War College. Her awards and decorations include the Distinguished Service Medal, Legion of Merit, Meritorious Service Medal, Joint Service Commendation Medal, Decoration for Exceptional Civilian Service, the Meritorious Civilian Service Medal, Superior Civilian Performance Medal, and the Global War on Terrorism Medal. She has been the recipient of the Organization of Chinese Americans Pioneer Award, the Hawaii Women Lawyers Attorney of the Year Award, the Honolulu YWCA Achievement in Leadership Award, The Catholic University Alumni Achievement Award, the Federal Executive Board Award for Excellence, the U.S. Army Pacific Community Service Award and recognized for lifetime accomplishments by the Women Veterans Igniting the Spirit of Entrepreneurship.

Judge Pietsch is married to James H. Pietsch, who is a Professor of Law at the University of Hawaii William S. Richardson School of Law and who is also a veteran.