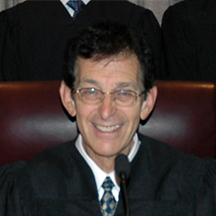 Judge Steinberg received his Bachelor of Arts degree from Cornell University in 1960 and his Bachelor of Laws degree cum laude from the University of Pennsylvania School of Law in 1963. At the law school, he served as Research and Note Editor of the Law Review and was a member of the Order of the Coif. He clerked at the Law Firm of Steinberg, Richman, Greenstein and Price in Philadelphia and served as a Research Assistant at the American Law Institute, prior to serving as a Law Clerk for then Circuit Judge Warren E. Burger on the United States Court of Appeals for the D.C. Circuit in 1963-64. He commenced a tour at the Peace Corps as an Attorney Advisor from 1964 to 1968, and then served as the Peace Corps Deputy General Counsel from 1968 to 1969.

Judge Jonathan R. Steinberg served as Chief Judge and retired in August 2005 from the U.S. Court of Appeals for Veterans Claims. He died on December 21, 2015. He is survived by his wife, Shellie, two children, and five grandchildren.